News from the professorship

Results of the exam IB II

The results of the exam IB II have now been registered.
Information regading the inspection will follow.

On March 19th, 2022, from 6am to 9am, Prof. Dr. Stefan Fröhlich can be seen in the ARD-Morgenmagazin.
The topic is “Wie blickt der (restliche) Teil der Welt auf Russland?” / “How does the rest world view Russia?” 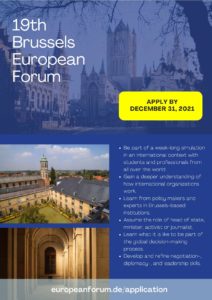 From March 13 to March 19 the BEF (Brussels European Forum) 2022 will take place in Oude Abdij Drongen near Gent (near Brussels, Belgium) and bring together around 50 students and young employees from all over the world. Participants will take on the roles of policymakers, either in simulated commitees, the G20, the Foreign Affairs Council of the EU, the Security Council of the NATO, or as journalists or activists. The participants of the political commitees will therefore have to justify their decisions towards the “public” of the event, which makes the BEF more realistic.

The aim of the project is to foster the awareness and interest of young people for politics, international cooperation, negotitations, civil society processes and institutions such as the EU and the NATO.

The application period has already started and will end in December 2021.

Information Regarding Lectures and Seminars in the Wintersemester 2021/2022

In the wintersemester 21/22 the lecture IB I and all seminars by Prof. Fröhlich will be held ONLINE. Further informations such as ZOOM-links will be announced via StudOn or email.

On August 24th, 2021, from 3 to 5pm Prof. Dr. Stefan Fröhlich can be seen on PHOENIX commenting on the G7 meeting on Afghanistan.

Prof. Dr. Stefan Fröhlich on the press conference with Angela Merkel on the current situation in Afghanistan 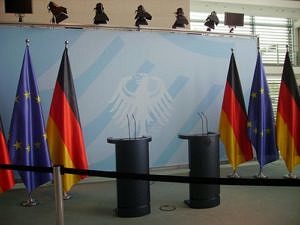 Prof. Dr. Stefan Fröhlich on the MSC-talk on the future of German foreign and security politics

On 26th of June, 2021, from 5 to 7.30 pm Prof. Dr. Stefan Fröhlich will be commenting on the MSC-talk on the future of German foreign and security politics. Hereby the three candidates for the position of German chancellor of CDU/CSU. SPD and Bündnis 90/Die Grünen come together in a TV program by MSC and ARD.

Prof. Dr. Stefan Fröhlich on the NATO Summit in Brussels

Prof. Dr. Stefan Fröhlich has been invited by the TV channel PHOENIX to talk about the NATO summit in Brussels on the 14th of June from 2 to 6pm. 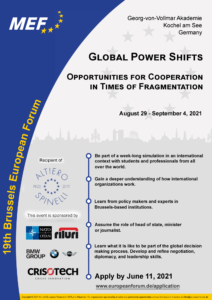 From 08.29.2021 to 09.04.2021, the non-profit organisation “Munich European Forum” is holding their “Brussels European Forum”. Participants have the opportunity to assume the role of a politicymaker, either in the Foreign Affairs Council, as a head of state of one of the G20, or in the meeting of the NATO ministers of defence, or to play the role of a journalist. Therefore, they can gain an in-depth understanding of political topics, practice their negotiation skills and meet students and young professionals from all over the world. During the preparation for the simulation the participants are guided by former participants and organizers and receive feedback on essays and other tasks.

The organisation has been cooperating with the NATO Diplomacy Division for many years, in March 2021 it received the Altiero Spinelli Award for “Oureach” by the European Commission.

Munich European Forum are optimistic that the forum will be able to take place as a life event with up to 50 participants in late summer 2021, this year in the Georg von Vollmar Akademie in Kochel am See.  All possible steps have been taken to ensure the health and safety of the participants. For that reason, there will only be online talks with NATO and EU experts. 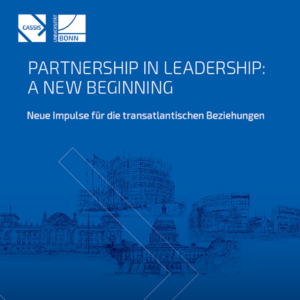 The Task Force on the Future of Transatlantic Relations, with the participation of Prof. Dr. Stefan Fröhlich, published its final report on 2 December 2020 at the International Security Forum Bonn of the Center for Advanced Security, Strategic and Integration Studies.

On 24 September 2020, the Task Force had been constituted at the invitation of the Henry Kissinger Professorship of the University of Bonn, composed of interdisciplinary national and international personalities from science, business and technology. In the weeks that followed, the Task Force took stock of the impact of current political developments in the United States.

The report of the Task Force also marks the start of the transatlantic work programme of the Henry Kissinger Professorship with the aim of establishing a new research focus at CASSIS of the Rheinische Friedrich-Wilhelms-Universität Bonn. 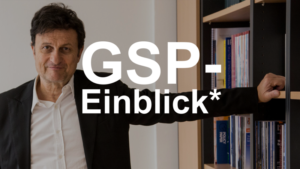 With the inauguration of the new administration in Washington, it is not only Europeans who hope for a return of the USA to the world stage and to the multilateralism of the Obama years. Their expectations could be disappointed, however, if they interpret Biden’s commitment to the unshakeable guarantee of US protection as a signal in the direction of a status quo ante in transatlantic relations. Moreover, Biden’s claim of restoring America’s power-political and moral dominance could fail in the face of the expectations of American society.

The Federal Academy for Security Policy is currently advertising two project positions for Master’s students interested in security policy who would like to gain professional practice in an interdepartmental working environment within the framework of an optional practical year.

The students will each work on a project from a security policy perspective, analysing the 2021 Bundestag elections or the report on the implementation of the Federal Government’s Guidelines for Civilian Crisis Prevention, and will be involved in the overall work of the Academy on the basis of these projects. Remuneration will be based on the collective agreement for the public service (TVöD); grouping will be in accordance with § 12 of the TVöD up to pay group 10.

The application deadline is 19 March. You can find the job advertisements at: www.baks.bund.de/de/stellenausschreibungen

The Federal Academy for Security Policy (BAKS) is the Federal Government’s central, interdepartmental training centre for security policy. The practical years advertised are in the portfolio of the Federal Ministry of Defence; applications must be submitted to the Federal Office of Armed Forces Personnel Management. All further information can be found in the job advertisements under the above link.

18.5.2020: as guest Prof. Fröhlich: „Corona-supply-shock“ – Global Trade and the consequences for the foreign policy

„The impact of the Corona pandamic on the economy will be drastic and unique. Prof. Dr. Stefan Fröhlich is sure there will be no way to bypass high gouvernment debts. As an expert in terms of global trade he warns against the anticipations which proclaim the end of global supply chains. The chairman of International Politics and Political Economy at the University Erlangen-Nürnberg talks with host Oliver Weilandt about the chinese-american power struggle, its consequences for the global economy and the WTO and about the upcoming role for Germany in the European Union.”

Listen the whole Podcast on the Homepage of the Deutschen Atlantischen Gesellschaft e.V.

Book presentation and discussion with

In his book „Das Ende der Selbstfesselung“ Stefan Fröhlich speaks for a revaluation of the german foreign policy, not only in terms of europe but also in a global context: Germanys foreign policy would be better than its reputation. Is Germany able to use ist foreign policy to resist extern presure and overcome crises like Brexit, nationalism or trade wars ?
After the welcome done by the former state secretary of the Ministry  of Foreign Affairs and ambassador Dr. Klaus Scharioth, Dr. Norbert Röttgen MP and chairman of the foreign commission of the german parlament gives an short introduction about the book`s content. Behind as well status quo as the future of Germany`s foreign policy are discussed by the former Foreign Minister Jürgen Trittin MP and Professor Stefan Fröhlich. The key question is Germany`s political role in a chinging world.
This event was hosted in Berlin as an cooperation by the Deutsche Transatlantische Gesellschaft e.V. and the radio Rundfunk Berlin-Brandenburg. 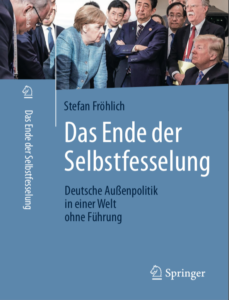 Europe is caught in permanent crises: Nationalism, Brexit und and opposing views relating to migration, the reform of the Eurozone and improvment of global competitiveness endanger europes unity. At the same time China and Russia increase their pressure on the European Union,  the developments at the southern border and at least the USA. Since the election of Donald Trump the values of Germany`s foreign policy are disrupted and also the liberal international order is under fire. Because of these circumstances in his new essay Stefan Fröhlich is in favor of an reorientation of Germany`s self-understanding in europe and the world: Germany`s foreign policy has an better reputation than minded. The country crossed a lot of red lines during the last years and reached for more and more charge. Also because of this it`s more than cynical, that especially the groups which refuse more global responseability are criticizing Germany`s egotism. Probably published in April 2019 Springer Fachmedien Verlag (ISBN 978-3-658-25143-7).

The chair in the media

For discussions and classifications Prof. Fröhlich is often invited as an expert in different radio and TV shows. Appealing to his main research fields he often comments on important events and developments inside the international arena.

Prof. Fröhlich about the Aegean conflict

According to the actual escalation of Greek-Turkish conflict Prof. Stefan Fröhlich referated about his view on the confrontation between the two Nato-Allies.

Prof. Fröhlich and the US retreat from Germany

Facing towards the retreat of US troops from Germany, Prof. Fröhlich was invited to Phoenix.

Twice already Prof. Fröhlich estimated the developments in the Syrian civil war. Recently the truce at the Turkish-Syrian border was discussed in one of his articels.

After the Democrats initiated the Impeachment because of the collusive behaviour between Donald Trump and the Ukraine President Volodymyr Zelensky, Prof. Fröhlich was invited to talk about his opion in terms of the causa.

Prof. Fröhlich about the G20 summit in Osaka

Prof. Fröhlich and the elections in the USA

The primaries for the presidential election 2020 are proceeding, at the latest since the Democratic Debates started. On June the 28th Prof Fröhlich talked about his thoughts which themes could dominate the US election, the challanges during the campaining and the chances for the Democrates.

Prof. Fröhlich`s opinion about the nuclear deal with the Iran

After the United States quited parts of nuclear deal with the Iran an diplomatic relationions became more and more worse the future of the non-proliferation regime is in danger. At the 11.06. Prof. Fröhlich explains how to deal with this, possible impacts for the global denuclearisation  and Germany`s role in this game in the Phoenix-Studio.

At April the 25th 2019 Prof. Fröhlich was invited to the media, to classify the meeting between North Korea´s  sovereign Kim Jong Un and the russian president Wladimir Putin.

Prof. Fröhlich about the economic relations between the EU and the USA

Because of the ongoing threatst to impose punitive duties against productes imported to the USA from the EU, especially cars, Prof. Fröhlich was interviewed at the 18th of February 2019 at Phoenix. The economic relations between the EU and the US, Donald Trump`s system for trade- and economic policy, potential effects for the german market and Angela Merkel`s keynote speech at the Munich Security Conference were discussed.

Prof. Fröhlich comments the quite if the INF treaty by the United States

After the US quited the INF treaty Prof. Fröhlich explained on February the first 2019 on Phoenix the reasons, possible consequences for the global proliferation and possible reactions.

At 8th of July Prof Fröhlich was invited to Phoenix to talk about inner NATO-cooperation.

At June the 25th Prof. Dr. Stefan Fröhlich was invited to Phoenix to discuss the Brexit situation.