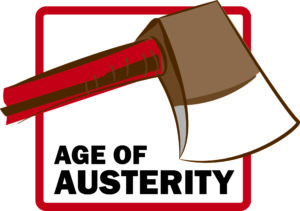 Austerity is hotly debated topic within the social sciences. It cannot be reduced to spending cuts, but has to be understood as a complex social phenomenon with consequences for mental health and well-being, social equality, politics and everyday life. Some observers therefore, speak of an “age of austerity”. As social reality is always mediated, media play a central role within the struggle between different evaluations and constructions of austerity. The international and interdisciplinary 5-day workshop „Texts and Images of Austerity in Britain. A Multimodal Multimedia Analysis“ that will take place from 25.09.-29.09.2017 at Friedrich-Alexander-Universität Erlangen-Nürnberg will bring together researchers from the computational and social sciences to analyse the discursive constructions of austerity manifested in text and visual form in printed media and on Twitter.

Central questions here are for example, the ontological, epistemological and methodological possibilities and limits of interdisciplinary research; the possibility to create computational tools according to research needs in the social sciences; the interplay of texts and images in the construction of austerity; the possibility to combine quantitative and qualitative methodologies; the relationship between printed and social media; the ideas, actors, emotions and geographies addressed in the British austerity discourse as well as the possibilities to transfer the results of the workshop to other cases (e.g. Brexit).

To have a really transdisciplinary collaboration on these and other questions, everyone of the approximately 25 participants will work with the same corpus that is provided by the research team in Erlangen. The common corpus consists of approximately 20,000 texts from The Guardian and The Daily Telegraph and nearly 400 photographs found within these in the years 2010 to 2016 as well as a sample of Twitter messages for the period under investigation. Based on this multimodal multimedia corpus individual presentations and the work in groups will alternate. The small number of participants makes it possible to advance urgent themes in the Social Sciences and the Computational Social Sciences on a (meta-)theoretical and practical level.

More information about the workshop can be found here in the CfP.

The workshop will bring together established experts and young researchers from a wide range of disciplines. A list of all participants can be found here.  Interested colleagues and students are are very welcome to join the public presentations. Please contact us if you are interested in visiting the workshop.

During the international and interdisciplinary 5-day workshop „Texts and Images of Austerity in Britain. A Multimodal Multimedia Analysis“ individual presentations that are open to the public and the work in closed groups will alternate. External guests are very welcome to join the public presentations. Researchers at FAU interested in joining the public presentations at the workshop should get in touch with Dr. Tim Griebel. More information about the academic programme can be found here.

The workshop is supported by FAU’s Universitätsbund, its Visiting Professorship Programme and its Emerging Talents Initiative.

The workshop will be held across two different departments of Friedrich-Alexander-Universität Erlangen-Nürnberg: Department of German Language and Literature and Department of Political Science.

Please click here to view the locations of the University faculties

FAU has two main locations – Erlangen and Nuremberg. There are also some parts of the University which are based in other areas of the region, such as in Fürth. The excellent regional infrastructure makes it quick and easy to get to these cities using the following modes of transport:

Erlangen and Nuremberg both lie on major train routes and are served by long-distance ICE trains and regional trains. Timetables are available from Deutsche Bahn and the local public transport provider VGN.

Nuremberg, Fürth and Erlangen are all accessible via the A73 motorway (Frankenschnellweg).

Underground trains run directly from Nuremberg airport to the centre of Nuremberg, where there are connections to trains and the public transport network.

If you have any questions, please get in touch with Dr. Tim Griebel.

Here you can find more information about the deduplication techniques that we have used in order to clean the LexisNexis data.