The chair of Prof. Dr. Clemens Kauffmann conducts research and teaches in all areas of political philosophy, political theory and the history of political ideas including philosophy of science and political methodology.

The bavarian research coordination within the scope of the Bavarian Centre for Political Theory (Bayerisches Zentrum für Politische Theorie) in which the Chair of Political Philosophy, Political Theory and History of Political Ideas participates since 2008, focuses on applied democratic theory, on the relations between politics, religion and economics, on biopolitics, on research on totalitarianism and on political consulting. The  research  is complemented by the coordination of junior research groups in the DFG Research Training Group 706 „Kulturhermeneutik im Zeichen von Differenz und Transdifferenz“ which was led by the chairholder as both deputy speaker and speaker between the years 2008-2010.

More information on the publisher’s homepage 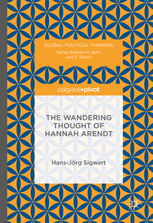 The Wandering Thought of Hannah Arendt

More information on the publisher’s homepage